When a medium is disturbed by a passage of a wave through it, the particles comprising the medium are caused to vibrate. This vibration will propagate in the medium from particle to another with a certain velocity. The process of the propagation of vibrations in the medium is called a wave.

Examples of the oscillatory motion are: the oscillations of a mass on a spring; the vibrations of a stringed musical instrument; the motion of a pendulum; and the oscillations of the molecules in a solid about their equilibrium position. Also, the electromagnetic waves, light waves, are characterized by oscillating electric and magnetic field vectors.

Where K, the constant of proportionality, is called the stiffness and the negative sign shows that the force is acting against the direction of increasing displacement. The stiffness k is the restoring force per unit distance and has the dimensions

is the acceleration. This gives

Where the dimensions of  k=T-2.,here T is the periodic time, the time necessary for one complete wave to pass any points, and v=1/T frequency, the number of waves which pass any point in a unit time. Introducing the angular frequency as ω=2πν

so the periodic time is:

if k/m is written as ω2.The equation of SHM becomes:

The behavior of a simple harmonic oscillator is expressed in terms of its displacement x, its velocity

Which are obtained due to the solution of the differential equation(1.4):

We can write the last equation in the form

Integration with respect to t gives

where  δ is the constant of integration. Thus

The limiting values of

are   ±1 so the motion takes place between the limits   x=±a   and the constant "a" is the maximum value of x, known as the amplitude of displacement.

This means that the phase has been increased by exactly   2π  radians. Thus by inspection ωT=2π hence

ω  Is known as the angular frequency  of the motion.

Then we can write the equation of motion in more convenient form as:

The values of the velocity and acceleration of a particle undergoing SHM are given by:

Thus the acceleration is proportional to the displacement but is in opposite direction, as can be seen from Fig.(1.2).

Fig(1.2) variation with time of displacement, velocity and acceleration where δ=0

3. Energy of a Simple Harmonic Oscillator

The fact that the velocity is zero at maximum displacement in SHM and is a maximum at zero displacement illustrates the important concept of an exchange between kinetic and potential energy. It is known that for motions, the total mechanical energy E which is the sum of kinetic energy KE plus the potential energy PE, is conserved.

The kinetic energy at any instant is given by:

The potential energy PE, at any instant is given by:

Thus the total energy is constant and has the value  1/2ka2       which it is proportional to the square of the amplitude of the motion. At the equilibrium position, the PE is zero, but  1/2ka2        . At other positions, the kinetic and potential energies have different values but their sum is always a constant equal to 1/2ka2.      .

In order to obtain the velocity at any displacement x, let us use the energy conservation relation:

This relation shows clearly that the speed is a maximum at the equilibrium position x=0 and is zero at maximum displacement x=a.

Figure (1.4) shows a simple pendulum consisting of a cord of length  l having a particle of mass m attached to its free end and making  an   angle θ  with the vertical.

The forces acting on m are its weight (mg) and the tension acting along the cord. The tangential component of the weight is the restoring force mg sin θ acting on m tending to return it to the equilibrium position.

Which represents SHM with angular frequency

Notice that T is independent of m and depends only on l and g.

Let a body of mass m is attached to a spring of force constant k and free to move over a horizontal frictionless surface. If the body is displaced to the right, Fig.(1.5), the force exerted by the spring on the body is directed to the left and is F = - kx, by using Newton's second law (

the  solution of this equation must be that of a SHM

5. Superposition of Two SHMs in One Dimension

To find the resulting motion of a system which moves in the x-direction under the effect of two SHMs of equal angular frequencies but of different amplitudes and phases, we can represent each SHM by its vector and carry out a vector addition.

If the displacement of the first motion is given by:

and that of the second by:

Then Fig.(1.6) show that the resulting displacement amplitude R is given by:

so the resulting SHM has the displacement

an oscillation of the same frequency  ω but having an amplitude R and phase constant  θ.

Suppose we now consider what happens when two vibrations of equal amplitudes but different frequencies are superposed. If we express them as:

Where ω2 > ω1  , then the resulting displacement is given by:

This expression is illustrated in Fig.(1.7). It represents a sinusoidal oscillation at the average frequency  ( ω1  + ω2 )/2 having a displacement  amplitude of 2a which varies between 2a and zero under the influence of the cosine term of a much slower  frequency equal to ( ω1 - ω2 )/2. Acoustically this growth and decay of the amplitude is known as "Beats"

Suppose that a particle moves under the influence of two SHMs of equal frequency, one along x-axis, and the other along the y-axis. The displacements may be written as:

The path followed by the particle is formed by eliminating the time t from Eqs. (30a,b) to leave an expression involving only x,y and the constants δ1 and δ2 . Expanding the arguments of the sines we have

If we carry out the process

Which is the general equation for an ellipse with δ = δ2 - δ1 . The form can be determined, and the curve sketched by putting specific values of x and y into Eq.(1.32)

These points are plotted to give the curve shown in Fig.(1.8) 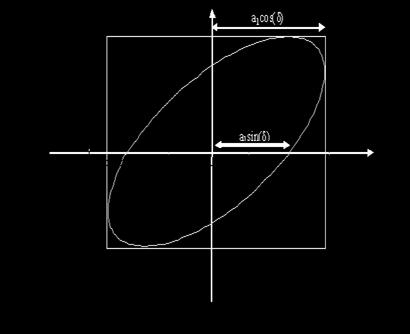 In the most cases of the ellipse are inclined to the x and y axes, but these become the principal axes when the phase difference

the ellipse degenerates into a straight line with slope a2 /a1.

a straight line with opposite slope –a2/a1. For δ= 0, 2π…………...., the ellipse degenerates into a straight line. The resulting vibration lies in one plane and the oscillations are said to be plane polarized. Similarly, the other values of δ yield circular or elliptic polarization.

The presence of resistance to motion means that another force is active, Fig. (1.10), which is taken as being proportional to the velocity. The new equation of motion becomes:

where r is the constant of propagation. When the coefficients m, r and k are constants, a solution of the form x=Ceαt  can be found.

Taking C as a constant length and substituting by x in Eq.(1.37) yields

So that either  x=Ceαt  = 0, which is trivial solution  or

The displacement can now be expressed as

The bracket ( r2/4m2- k/m) can be positive, zero or negative depending on the relative magnitude of the two terms inside it.

Each of these conditions gives one of the following three solutions:

Notice that, neither (1) nor (2) gives oscillatory behavior.

Figure (1.11) shows such behavior when the system is distributed by a sudden impulse. It will return to zero displacement, creeps back or relaxes, quite slowly without oscillating about its equilibrium position.

When ( r2/4m2< k/m) the damping is light, and this gives the most important kind of behavior, oscillatory damped simple harmonic motion. The expression ( r2/4m2- k/m)1/2 is imaginary quantity which can be rewritten as:

If x=0 at t=0 then δ=0; Fig. (1.13) shows the behavior of x with t. The presence of the force term r x. in the equation of motion introduces a less of energy which causes the amplitude of oscillation to decay with time as e-rt/2m.